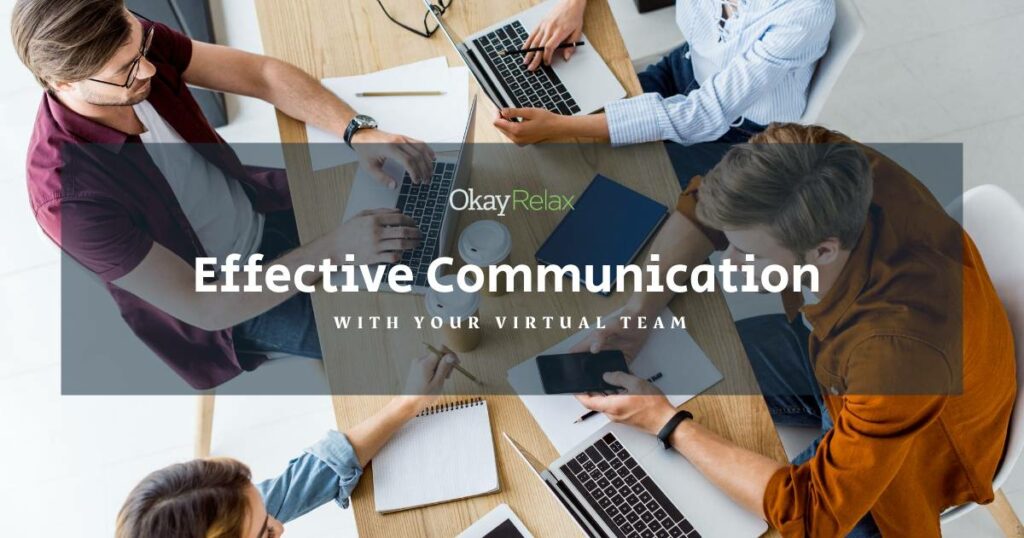 To say that remote work is a challenge is quite an understatement, much more so when you have to manage a virtual team. Communication is a crucial part of ensuring a smooth flow of business, so we’ve listed a few tips to help you communicate effectively with your virtual team.

Zoom fatigue is quickly becoming a thing during this pandemic. A few months ago, online conferences seemed like a novel idea. Since most governments issued stay-at-home orders in their respective regions, conducting office meetings in the comforts of your own home and not having to dress up sounded like a luxury.

But now, virtual meetings are starting to get on some people’s nerves. Signals get choppy, that one person’s dog keeps barking during the meeting, people keep forgetting to mute or unmute, your first meeting is only halfway through, and another meeting is set to begin, and the next thing you know the day is already gone with barely any work done. Sometimes it’s just easier to turn off the video, mute the microphone, and get distracted while someone else does all the talking.

So how do you boost the productivity of your virtual team in a work-from-home setting when distractions are all over the place?

Social media has made people’s attention spans shorter than ever. Facebook has condensed news to just headlines, Twitter has limited announcements to 240 characters or fewer, Instagram just prioritized photos over words, and Instagram stories and TikTok pushed this even further, turning feeds into just seconds-worth of videos. Working with your virtual team needs to go with this flow.

Be direct. Everyone’s attention is focused on the host for the first few minutes of the meeting. Grab this opportunity to zero in on the agenda, which means no dilly-dallying. This makes it easier to set the tasks that need to be done and allows the team to navigate through their tasks easier.

In the usual office setting, leading the meeting and communicating with the team include handshakes, hugs, back taps, and most importantly, eye contact. That’s now impossible to do in a virtual meeting when most people’s eyes are directed at their screens instead of eyes.

The next best thing is to make the effort to engage every member of the virtual team. Personally acknowledging team members one by one is a huge way to boost productivity and make each of them feel important.

Worth mentioning, too, to maximize the lull in between the actual time set for the meeting and waiting for the team to be complete. As people are coming in, take the time as a host to greet the members one by one, ask them about their day, their latest side ventures, their reaction to their favorite team’s recent game, or to that romantic scene in the series they’re watching.

That way, the virtual team would feel valued, stays attentive for the meeting, and thus have the motivation to be productive when you delegate their tasks, all while keeping the actual meeting (when everyone is complete) focused on the agenda at hand.

Tons of distractions are incredibly tempting in a work-from-home setup. As previously mentioned, it’s ridiculously easy to turn your camera and microphone off, and just shop online or play games while the meeting is ongoing.

One way to keep the team’s attention is to make sure that everyone has their video on. Another more effective way is to personally acknowledge each member, walk them through their tasks, and make sure that they converse with you. This serves several purposes: to keep the virtual team engaged, verify that they understand the tasks that they need to do, and bring validation to a member that their work is important, thus boosting their productivity.

Or when a task is finished, personally commend a team member for a job well done. When something is lacking, it’s best to listen to the members and ask them what went wrong, acknowledge what has been done, and suggest what could be done moving forward to improve. This way, it would make the team more amenable to opening up about problems they have encountered and communicating better towards solving the issues together.

Presentations are a must-have in meetings, and even more so in virtual conferences. After all, you can only stare at each other’s faces for so long without getting bored.

But when you’re not so good at creating visually stimulating presentations, it’s always an option to consider hiring an assistant from virtual assistant providers like OkayRelax to do this for you. That way, you can focus on the core messages of your meeting and/or your main responsibilities at work.

This goes back to people’s attention span. It keeps the team’s attention on you and what you’re saying, instead of something else that could pop up in their phones or their laptops.

Make an effort to be presentable.

Taking the time to take a bath, dress properly, and doing your hair or make-up seems to be an irony for a work-from-home individual, as one of the advantages of remote work is precisely the completely unnecessary need of having to prep yourself up for a long day’s work. However, a lot have shown a remarkable increase in productivity as they began to retain their daily grooming habits for work.

Experts have suggested setting up fixed spaces either for work or school, and have it separate from the space for meals and relaxation. Having a fixed routine would also help in realigning your and your virtual team’s mindset that now is the time for work, even if it’s remote. This includes the usual motions of going to work, such as dressing up.

A bonus of this productivity hack is that when the team sees you looking prepared, they’re more attentive to what you have to say compared to an instance when you’re dressed casually. They may even be encouraged to do the same, thus keeping the team’s attention on the task at hand, and realigning their mindset to be productive at work.

Always set aside time to relax – not just for yourself, but for your team members as well. As we’ve said, remote work can be taxing for mental health.

So set aside some time to have fun with your team, whether through a virtual drinking session at the end of the week, a wholesome game of virtual charades, or playing together in a multiplayer online battle arena such as DOTA2, League of Legends, Fortnite, PUBG, Overwatch, or Mobile Legends.

More than encouraging productivity for the team, it’s also a great way to boost camaraderie and forging relationships with the team members. It’s easier to open up and talk about problems when you’re all friends. Work can be fun when you all like working together.

And in case you’re still burdened with multiple Zoom meetings in a day, you can always get virtual assistant services from OkayRelax. Having a personal and dedicated virtual secretary could considerably help with the administrative tasks while you focus on the core responsibilities you have with your team.